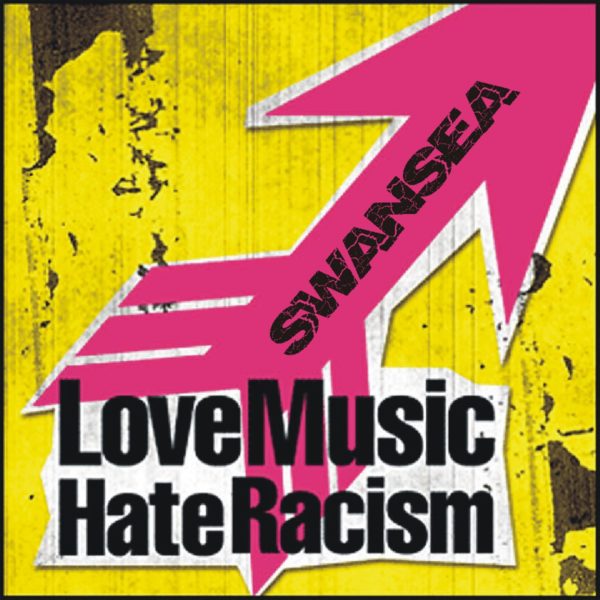 Richard has been using music to campaign against racism since the 1990s, both in East Anglia and South Wales.

Zoom interview and transcript by Stella, an Italian student who is researching into the use of music as a way of opposing racism and Fascism.

Stella: Can you tell me how the Love Music Hate Racism campaign started?

Richard: It came out of Rock against Racism (RAR), which was set up in the late 70s due to the growth of a Nazi organisation called the National Front (NF), which was suddenly doing very well, winning lots of votes and organising violent attacks. There were some racist statements by leading musicians, particularly  Eric Clapton; his comments were especially offensive, as he’d made a very good living out of exploiting black music.  This led to some musicians and music fans writing to the music papers, and from that, Rock against Racism was launched.

It was very effective in the 70s; it united black and white and it did help beat back the racists. It made it cool to be anti Nazi.

Unfortunately a similar campaign was needed in the 1990s and once again now; Love Music Hate Racism revives a slogan from RAR, and is again important because we’ve had far-right groups such as English Defence League, the so called Democratic Football Fans Alliance and so on, using racism.

Stella: What made you want to get involved?

Richard: I have always been a massive music fan and also very keen on politics, and  my favourite artists combine the two. I love the Manic Street Preachers, the Welsh band, and they played this massive anti Nazi carnival in Brixton in the 90s and around 100,000 of us went down to that, it was just incredible, it was such a powerful statement of how music and politics can join together to really make a difference. When I started to organise gigs, I ensured Love Music Hate Racism was part of it; even when we aren’t raising money for LMHR, we have the slogans and badges there, a stall, a bit of politics. So a whole generation of young people, who go to these gigs think that music and anti-racism go together. As of course they do, due to the multi cultural history of popular music.

Stella: Can you give examples of a successful initiatives?

Richard: Rock Against Racism in the 70s was incredibly successful as it turned the tide on the NF, who seemed to be unstoppable at the time. The campaign against Nick Griffin and the BNP in Barking in 2010 was also very successful; people thought they were going to get their first MP, but the tide was turned on them, and that was at least partly through Love Music Hate Racism focussing on young people, having lots of multicultural gigs, working with Unite Against Fascism  and teachers unions and other groups, saying that whatever the problems are in Barking, the solution isn’t racism.

Stella: So in your opinion, what makes for successful campaigns is involving lots of young people ?

Richard: Yes! The far right always try to use racism and economic crises to build, and there’s always a danger that people might be influenced by them. People who are desperate for a job, or desperate for a house, or worried about the Health Service, can be influenced by that poisonous racism, so the need is to build really strong opposition to that, and to say it’s OK to stand up against it, in fact it’s cool to stand up against it. When musicians that young people respect, say ‘racism is wrong’, it does make a difference.  We want to make anti-racism the norm in gigs, what people expect in gigs, we want every music venue to have a Love Music Hate Racism poster and to welcome LMHR stalls.  And 99% of venues are very happy to do that. This makes it clear that popular music is no place for racism, because its origins go back to the music of black slaves which was adopted and adapted by poor white people, and the mix of cultures makes it the brilliant vibrant creative thing that it is. Racist culture has nothing, no vibrancy or creativity or excitement. It’s just a cultural, political, aesthetic and a social dead end.

Stella: Who are the people who made LMHR campaign possible? What kind of support do you get?

Richard: LMHR is funded from donations. Trade Unions support generously – trade unions have traditionally stood up against Fascism: many hundreds of thousands of trade unionists ended up in Hitler’s gas chambers, of course. The local campaigns are also funded by the gigs, which then provides funds for leaflets, badges, posters and so on. We have had some major label support as well and that helped both financially and also in getting us access to up and coming acts. But we’re mainly supported by work on the the ground with local groups across the country.

Stella: Do you think it is important the direct involvement/support of musicians, singers, bands for your campaign? Can you give me examples?

Richard: Yes, yes! Having Stormzy, Ed Sheeran, IDLES and Coldplay along is a real help ’cause they influence millions of people who will see them wearing a T shirt or endorsing LMHR. The same for the massive festivals we run.
But at the same time, the grassroots is just as important. If you organise a small DIY gig in any town, almost everybody who is in a band or into music, is gonna be an anti-racist, because they know where popular music comes from, its multicultural roots. And I’ve not met anybody who I’ve asked to play a Love Music Hate Racism gig who has said no; everybody always said yes, and is very enthusiastic about it. Just playing a gig with a Love Music Hate Racism banner on the wall or with a logo stuck on a guitar, on the speakers, or on the drum kit, or with a LMHR stall with badges and leaflets and maybe a few words spoken from the stage, all make such a difference. People go home from gigs covered in badges and stickers and taking leaflets and tell their friends. In that way it stops the fascists from feeling confident, makes the racists realise that they are the minority, as they are, and stops them having confidence to promote racism.

Stella: Due to the corona virus outbreak, how are you organising your activities for the next few months?

Richard: That’s a good question! I’ve totally changed the way I’ve operated since the last physical gig on March 14th. Since then all activities have been online, so I’ve done lots of interviews with bands where we play videos, sometimes the bands play live, we chat, and we ask people to donate if they can afford to, to Love Music Hate Racism.
It’s not as exciting as going to a live gig, but it’s worthwhile, we can’t afford to sit back and do nothing. On the plus side, people from all around the country or even the world can join in, so online activities have been useful and inspiring too.
More recently a we’ve held some on socially distanced events in support of BLM and to show support for them against the racists, but I fear it may still be a long time until we have any actual grassroots gigs again.
So I’d urge people to get involved with the online events, to follow LMHR on social media and find and join their local anti racist group. I’d also like to plug the new film ‘White Riot’ all about Rock Against Racism, which tells its story much better than I have; watching that would be a very good use of Lockdown time. It shows that music is such a powerful way of helping us organise and fight for a better world.

Many thanks to Stella for transcribing this in a language which is not her first, proof again that music can break down barriers! R*E*P*E*A*T is at www.repeatfanzine.co.uk