Morrissey has jumped from the gutter into the sewer with his latest racist outbursts, which single out Muslims, Jews and Black and Asian politicians.
Echoing fascist and ultra nationalist parties in Europe, the singer has called for Halal and Kosher meat to be banned and dumped abuse on shadow home secretary Diane Abbott and on London’s Mayor Sadiq Khan.
According to Morrissey, “halal slaughter requires certification that can only be given by supporters of Isis”, a process which he describes as “evil” and which should be banned. He also calls for the outlawing of Jewish kosher meat preparation, which he says is “very cruel”.
The message is barely coded. From the Nazi BNP and EDL in Britain to Marine Le Pen’s Front National in France to Hungarian prime minister Victor Orban’s anti-Semitic, anti-Muslim, anti-migrant election campaign last month, calls to ban Halal and Kosher meat have acted as a dog whistle for their Nazi followers.
Just in case the point wasn’t clear, Morrissey rounded on Sadiq Khan, the Asian Mayor of London, accusing him of being in charge of a “debased” city and claiming he “cannot talk properly”. The black, woman shadow home secretary, the subject outrageous racist abuse, which reached a peak during last year’s election campaign, is dismissed with a sneer that “even Tesco wouldn’t employ Diane Abbott”.
To cap it all, the singer tells us “the modern Loony Left seem to forget that Hitler was Left wing,” before giving a plug to For Britain, the ultra-right wing party set up by former UKIP leadership candidate Anne Marie Waters. In 2016, Waters, together with English Defence League founder Tommy Robinson, tried to launch Pegida UK – a copy of the German far right umbrella group, which has provided a fertile environment for Hitler lovers to organise and recruit.
None of this is accidental. It isn’t a result of being misquoted by the media. Morrissey spelled out these vile views on his own website, because he didn’t trust the media to convey his message clearly enough. He has been here before and he’s backed down in the face of outrage from his fans and the wider public, but he’s been emboldened again by the climate of Islamophobia, anti-Semitism and general racism that is sweeping the world.

Stand up to racism

Morrissey’s views have no place in music and no place in wider society and we utterly condemn his statements.
Forty years ago Rock Against Racism was launched after blues guitarist Eric Clapton used his stage in Birmingham to sing the praises of racist extremist Enoch Powell. Morrissey is treading an even more dangerous and extremist path than Clapton.
Rock Against Racism, and its successor Love Music Hate Racism, have shown the power of music to overcome bigotry and division and we will do so again.
We will be organising gigs and educational events in towns and cities across the country, to shut up bigots like Morrissey and his racist friends. We call on all music lovers to join us and celebrate the multi-cultural fusion that represents the best of 21st century Britain. 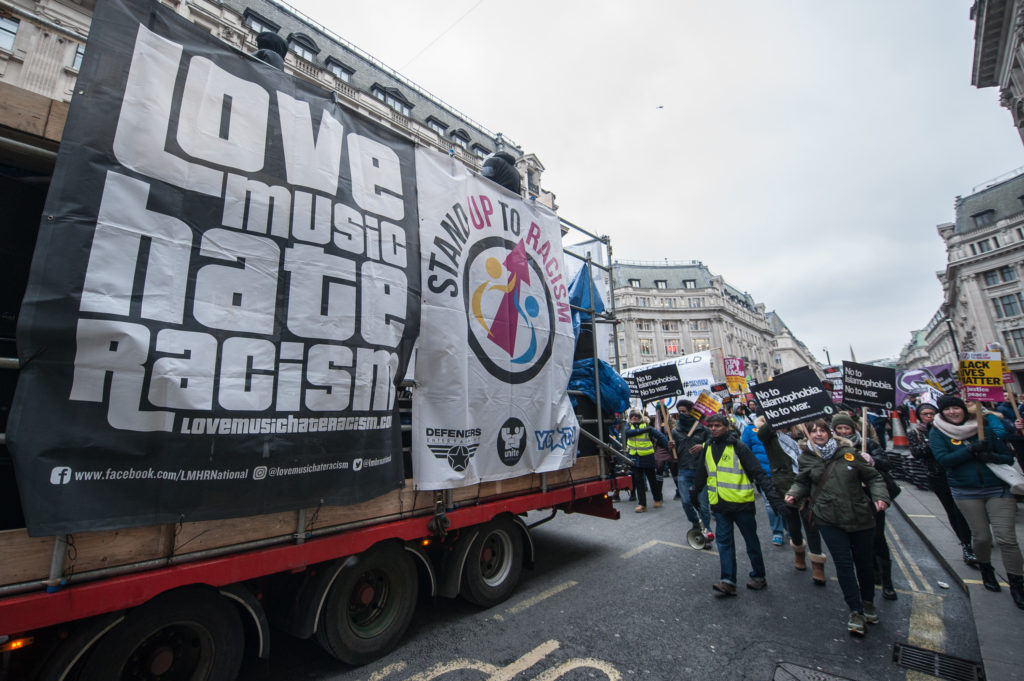 LMHR on the M17 international anti racism march in London organised with Stand Up To Racism. 17-3-18 (picture: Guy Smallman)